“Let’s say perhaps that Picasso helped me to see…”

Picasso’s capacity for emotional depth in his late oeuvre is as remarkable as his creative energy. Even as October 1971 marked his ninetieth birthday, Picasso remained prolific, producing over one thousand works of art between 1970 and his death in 1973, and Tête de femme is an exceptional example of his mature style: a penetrating portrait which combines fluid lines with complex semi-opaque passages to create a haunting image of a face emerging from a fog of saturated color.

“What I want to do is to distort the thing far beyond the appearance” said Francis Bacon, “but in the distortion to bring it back to a recording of the appearance” (quoted in an interview with David Sylvester, 1966). Picasso’s ability to synthesize abstraction and naturalism in his intensely psychological portraiture was one of the catalysts that redefined the genre for the 20th century and set the direction for subsequent artists. Mark Grotjahn put it frankly: “I think my masks reference artists who reference primitivism. They’re not directly connected to tribal arts.” Quite apart from the Picasso-like almond-shaped eyes which peer out from the mass of color in Grotjahn’s Face series, the densely-worked effects themselves can also be traced back to the modern master’s application of colored pencil and pastel exemplified in the thoroughly worked surface of Tête de femme.

As to Picasso’s own references, the figure in the present work reveals a hybrid amalgam of his most influential muses. The present skull-like form rekindles the emotive qualities of the artist's raw and transfigured depictions from years earlier and echoes his so-called "bone period" beginning in the late 1920s. “I have an absolute passion for bones...modelled, not just chipped out… On any piece of bone at all, I always find the fingerprints of the god who amused himself with shaping it...the convex and concave forms of bones fit into each other...artfully are 'adjusted' to each other” (Pablo Picasso quoted in Brassai, Picasso and Company, New York, 1966, p. 74).

From the Surrealist Dinard-inspired scenes of Marie-Thérèse, in which he portrays his secret lover as an ossified form against a soft sky (see fig. 3) to the torqued, assertive busts of Dora Maar from the following decade (see fig. 4), Picasso's portraits resonate with one another over time. While supplanted with the soft features and large eyes of his wife and ultimate inspiration Jacqueline Roque, Tête de femme overwhelmingly exerts the sort of turbulent energy so often associated with Dora Maar. Befitting the present work, James Lord famously described the photographer after meeting her in 1944: “the strong, straight nose…the jaw a trifle heavy and the more forceful for being so…and eyelashes like the furred antennae of moths" (quoted in Picasso and Dora, New York, 1993, p. 31). The ferocity of Picasso’s relationship with Maar resurfaces throughout his later work, but the drama and upheaval of his depictions of her alternate with a sense of quiet introspection which the present work also manages to project in stark contrast to the fiercely colored and richly layered background. Maar’s was “a sensitive uneasy face, with light and shade passing alternately over it” as the writer Jean-Paul Crespelle noted (quoted in Mary Ann Caws, Picasso’s Weeping Woman: The Life and Art of Dora Maar, Boston, 2000), a description which holds true for the mesmerizing expression of the present work.

The sculptural qualities of Tête de femme (see fig. 6) go beyond the African statuary (see fig. 5) that one associates with the exaggerated and angular features of Picasso’s early portraits. Its distorted shapes and undulating lines have an evocative power that recall the organic, sinuous forms of Arp’s semi-figurative marbles (see fig. 7)–the white flesh tones redolent of early modernist sculpture as much as the ghastly make up of cabaret dancers recorded by the previous generation. Alfred Barr’s description of Arp as a “one-man laboratory for the discovery of the new form” applies equally to Picasso throughout his life, his final decade being no exception (quoted in Arp (exhibition catalogue), The Museum of Modern Art, New York, 1958, p. 7). The richly-textured pentimenti in the left half of Tête de femme reinforce this sense of Picasso the sculptor, with the smooth bust emerging from the rough-hewn shadows in the manner of a half-polished Rodin or Michelangelo marble.

Tête de femme also relates to Picasso’s famous sequence of self-portraits executed in 1972 (see figs. 8-11). The shared skull-like qualities are raw and revealing psychological projections of this protean figure confronting his demise. Making art was tantamount to being alive for Picasso, and the powerful portraits he produced towards the very end simultaneously acknowledge the imminence of death while affirming his continuous powers of creation. 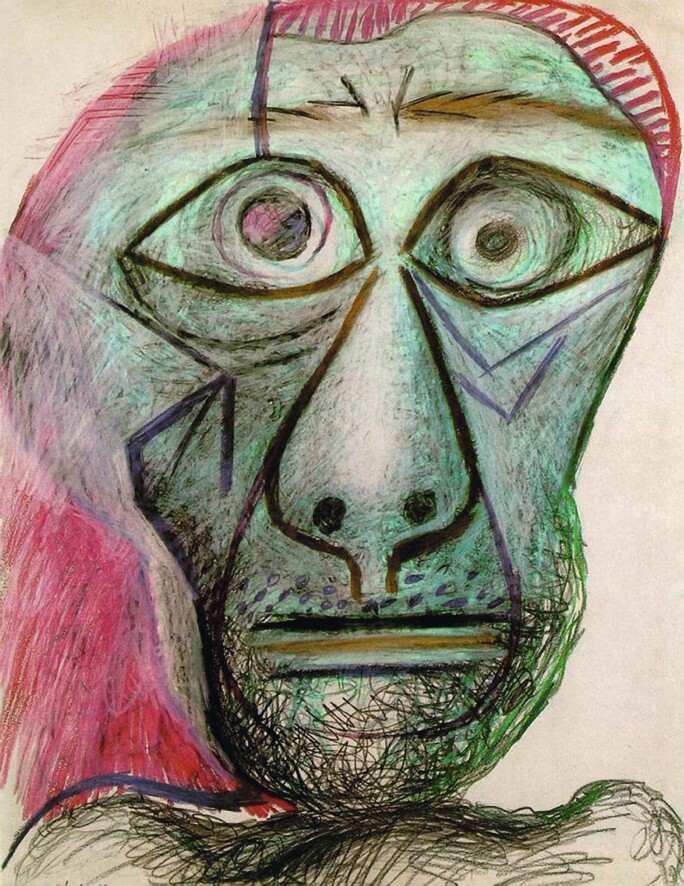 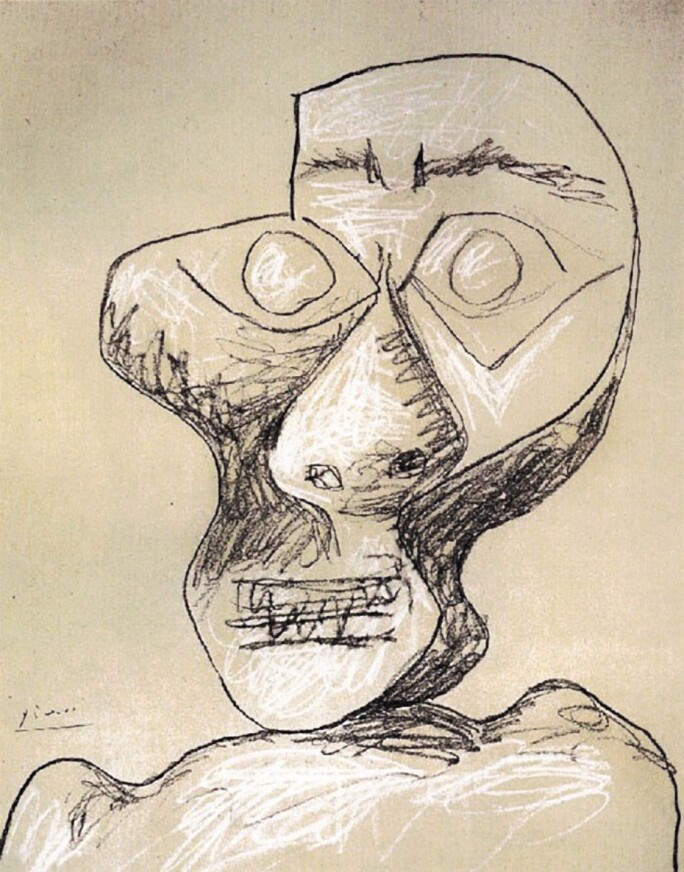 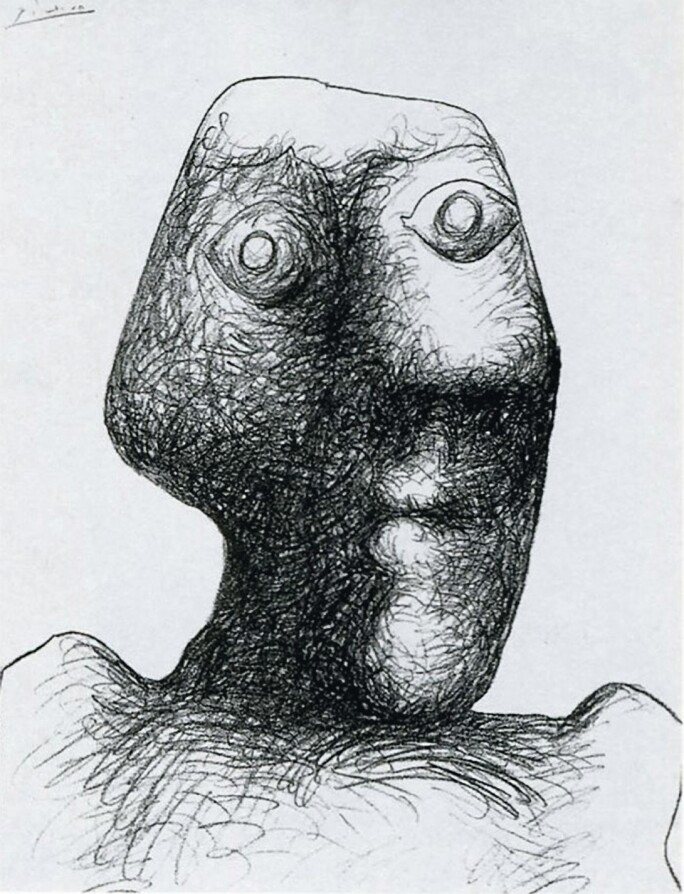 There is a temptation to see the portraits created in the final stages of any artist’s career as providing the most authentic insights, but even more so in the case of Picasso for whom the human figure and the face were his most enduring subjects, tackled in infinite ways under the guise of countless personae. His growing sense of morbidity is well documented; time was running out "to prepare faces" and to continue "to murder and create" with his countless visions and revisions, to borrow the words of his fellow modernist T.S. Eliot.

Tête de femme is a superb example of the exceptional mélange of introspection and vigor that defines Picasso’s final period. As Louise d’Argencourt writes: "The contemplative character of Picasso's last works–expressed in part in the tranquil poses of his seated figures, the importance given to their heads, and the absence in them of all agitation–is often balanced by a spirited execution that makes use of many painterly effects" (quoted in op. cit., Montreal Museum of Fine Arts, Montreal, 1985, p. 284).