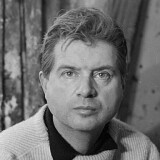 Born 1909. Died 1992.
Interested in selling a work by Francis Bacon?
Get an Estimate

Works by Francis Bacon at Sotheby's

One of the major British artists of the post-World War II period, Francis Bacon is renowned for his paintings of single subjects represented in isolation – in empty rooms and cages, or against black walls – their faces and figures distorted in grotesque style. The artist’s emotionally charged, raw vision of human beings is a testament to his understanding of the suffering and alienation that afflicted mankind during the second half of the 20th century.

Born on 28 October 1909, to English parents in Dublin, Ireland, Bacon left home at seventeen and travelled to Berlin, then Paris. Settling in London in 1925, he began working as an interior decorator and later started to paint. Although his self-taught work started attracting interest in the late 1930s, his breakthrough came in 1944, with the triptych Three Studies for Figures at the Base of a Crucifixion, whose distorted subjects, rendered in dark colors and rough brushwork, firmly established his style. Starting in the mid-1960s, the artist mostly produced portraits of friends and drinking companions, and following the 1971 suicide of his lover, George Dyer, his art became inward-looking and preoccupied with the passage of time, as evidenced in his Study for a Self-Portrait –Triptych, 1985–86. Renowned for his carousing and his notoriously cluttered London studio, Bacon died while vacationing in Madrid, Spain, on 28 April 1992.

His works can be found in the collections of the Art Institute of Chicago, the Hirshhorn Museum and Sculpture Garden, Washington DC, and the Museum of Modern Art, New York. According to Sotheby’s Mei Moses, the average compound annual return for Francis Bacon resold at auction between 2003 and 2017 was 13.9%. 87.1% of 31 such works increased in value.

Museums with Works by Francis Bacon