The Untold Story of Stephen Junkunc III, One of the Great Chinese Art Collectors

New York
There are a handful of collectors in the world of Chinese art that are inextricably associated with works of exceptional quality. Stephen Junkunc, III, (d. 1978) is among these luminaries. Discover more about this inspiring collector ahead of Sotheby's Asia Week | Fall 2019.

T here are a handful of names in the world of Chinese art that are inextricably associated with works of exceptional quality. Stephen Junkunc, III is amongst these luminaries. The name itself instantly evokes a period during which some of the greatest Chinese treasures came to America. Today, the Junkunc name serves as one of the most important, and indeed desirable, provenances for Chinese art. Formed in America in the mid-20th century by Stephen Junkunc, III (d. 1978), the Junkunc Collection at its height numbered over 2,000 examples of exceptional Chinese porcelain, jade, bronzes, paintings and Buddhist sculptures; serving as a testament to a period of unprecedented wealth of Chinese material available in the West, as well as to an astounding intellectual curiosity and the means with which to buy internationally from the leading dealers in the field.

Stephen Junkunc, III was born in Budapest, Hungary circa 1905, and emigrated to Chicago, Illinois as a young child, where his father Stephen Junkunc, II (d. 1948), a tool-and-die maker, founded General Machinery & Manufacturing Company in 1918. The company specialized in the manufacture of knife edge fuel nozzle heads. With the outbreak of World War II, General Machinery converted its shop for the war effort and began manufacturing various aircraft parts, including B-29 hydraulic spools on behalf of Ford Motor Company, who was sub-contracting work from engine maker Pratt & Whitney.

Alongside his role as manager and part owner of the company, Stephen Junkunc, III spent his free time forming an extraordinary collection of Chinese art. With an unabated hunger for knowledge, Junkunc was a voracious reader who studied the Chinese language and kept extensive libraries of Chinese art reference books and auction catalogues at both his home and office. Junkunc appears to have made his first acquisitions in the early 1930s, apparently after having happened upon a book on Chinese art. It is perhaps no coincidence that Junkunc’s initial collecting activity largely coincided with the establishment of the Chicago branch of the reputable Japanese dealers Yamanaka & Co., Ltd., who opened a gallery at 846 North Michigan Boulevard in 1928. Many of Junkunc’s early purchases came from Yamanaka, and before long, he was buying directly from the leading London dealers specializing in Chinese art: Bluett & Sons, W. Dickinson & Sons, H.R.N. Norton and, of course, John Sparks, seeking fine examples of porcelain for his collection.

The collection of Chinese ceramics from the Junkunc Collection ranks amongst the greatest assemblages of porcelain ever formed in the West. The collection included two examples of the fabled Ru ware, of which only eighty-seven examples in the world are known. These two dishes represented two of the only seven examples of Ru ware to have been offered at auction since the 1940s. One of the Ru dishes, purchased from C.T. Loo in 1941, set a new world record when it sold at auction for $1.6 million in New York in 1992, and is today in the esteemed collection of Au Bak Ling. Junkunc’s discerning eye for ceramics was well established even in his nascent years of collecting, as evidenced by a letter he wrote to W. Dickinson & Sons in October 1935, requesting that they be on the lookout for him for Kangxi and Yongzheng period copper-red, peachbloom and celadon-glazed ‘cabinet pieces’ of ‘very fine quality only’. In May of 1936, he wrote to Bluett & Sons in London requesting that they continue to look for underglaze-red and peachbloom pieces for him, and to H.R.N. Norton in July of 1936 asking that he ‘send [him] photos of any nice pieces in monochromes finely decorated pieces of the Ching dynasty’, along with Ming pieces ‘in the Chinese taste’ such as ‘fine dainty bowls, stem cups, vases etc. of almost any description, but not the clumsy types with poor color and hurried drawings’.

Following the Japanese attack on Pearl Harbor in 1941, the inventories of Yamanaka’s galleries in America fell into the custody of the United States government, which dissolved the company, seizing and eventually selling off much of its merchandise through auctions held at the Parke-Bernet Galleries in New York in May and June 1944. This same year Hisazo Nagatani (d. 1994), the former manager of Yamanaka’s Chicago gallery, established himself as an independent dealer in Chicago under the company name Nagatani Inc. Nagatani continued to serve as a consistent source of works for Junkunc for over three decades, supplying by far the majority of the works in the Junkunc Collection. During the 1940s, Junkunc appears to have broadened the scope of his collecting interests to focus on earlier material, including Song to Ming ceramics, archaic bronzes and – crucially – Buddhist sculpture. Aside from Nagatani, he purchased extensively from auction, particularly from New York’s Parke-Bernet Galleries, as well from Tonying & Company and C.T. Loo, both in New York.

By the early 1950s, Junkunc had amassed an impressive collection of Chinese works of art which by then was largely securely stored in the museum-like environs of a subterranean bomb shelter in the grounds of his home in Oak Park, Illinois. In a 1952 profile in the Chicago Tribune, the bunker is described as storing a ‘priceless hoard’, with ‘shelves weighted with priceless pieces of Chinese art, prizes produced thru a span of centuries. A record of a nation in tapestry, bronze, jade, pottery, robes, and lacquer':

"Junkunc sits spider-like in the center of a web of agents scattered throughout the world. His escapades in procuring some objects have called for the suavity of a diplomat, the daring of an international spy, and the speed of a distance runner. Cloaked in intrigue and secrecy, and spiced by competition, collecting oriental art is no role of a Milquetoast."

Alfred Salmony (1890-1958), Professor at the Institute of Fine Arts, New York University since 1938, was one of the leading international authorities on the subject of early Chinese jades at the time, having published Carved Jade of Ancient China in 1938. He was planning a two-volume history of Chinese jade, to be entitled 1958, when he visited Junkunc in February 1950 to examine his collection of early Chinese jades. This meeting forged a strong friendship between the two men, who shared a passion for the material and a desire to formulate a chronology for post-archaic jades, a subject little understood at the time. For over eight years, Junkunc and the English collector Desmond Gure (1905–1970) supported Salmony in the research and preparation of this book. Tragically, Salmony died at sea whilst travelling to London on April 29th April 29th 1958, before the work was finished. The first half of his book was posthumously published in 1963 and entitled Chinese Jade Through the Wei Dynasty, illustrating a number of works from both Junkunc and Gure’s collections.

The 1950s witnessed perhaps the most fervent period of buying activity for Stephen Junkunc, when he continued to make large acquisitions from Nagatani and Frank Caro, the successor of C.T. Loo, as well as from Alice Boney and Warren E. Cox in New York, and Barling of Mount Street Ltd., in London. Unfortunately for Junkunc, this decade of buying coincided with the Korean War and restrictions placed by the American government on importing Chinese works of art into America. No works were permitted to be imported into the country unless it could be proven that they had not been in the hands of a national of China since 17th December 1950. Whilst these restrictions did, with the encouragement of John Sparks, encourage Junkunc to diversify his collection into non-Chinese works of art, an auction in Paris in 1952 presented him with an opportunity he could not afford to miss.

The sale of the collection of the Marquis de Ganay held at the Hôtel Drouot in May 1952 included a dazzling array of ancient Chinese art. Junkunc was successful in acquiring six lots from the sale (two of which are offered in this auction, lots 241 and 234) but endured multiple failed attempts to import them into the United States. It is only due to the numerous affidavits, witness documents and original purchase invoices that were submitted to the Foreign Assets Control department as part of his successful application that we today know the additional important provenances of these works.

Throughout his lifetime, Stephen Junkunc, III worked closely with and actively supported the curators at American museums. He retained a particularly long-standing relationship with the Art Institute of Chicago (AIC), repeatedly loaning works from his collection to exhibitions through the 1940s-60s. Works from the Junkunc Collection were also loaned to the seminal Ming Blue and White exhibition at The Art Institute of Chicago, which traveled to the Philadelphia Museum of Art in 1949, and to the Arts of the T’ang exhibition of 1956, at the Los Angeles Museum of History, Science and Art. Junkunc’s generosity towards American museums also extended towards bequests, with gifts from his collection now housed in the Milwaukee Public Museum, Wisconsin, and the Lowe Art Museum, University of Miami, Florida, near his Coral Gables summer home. 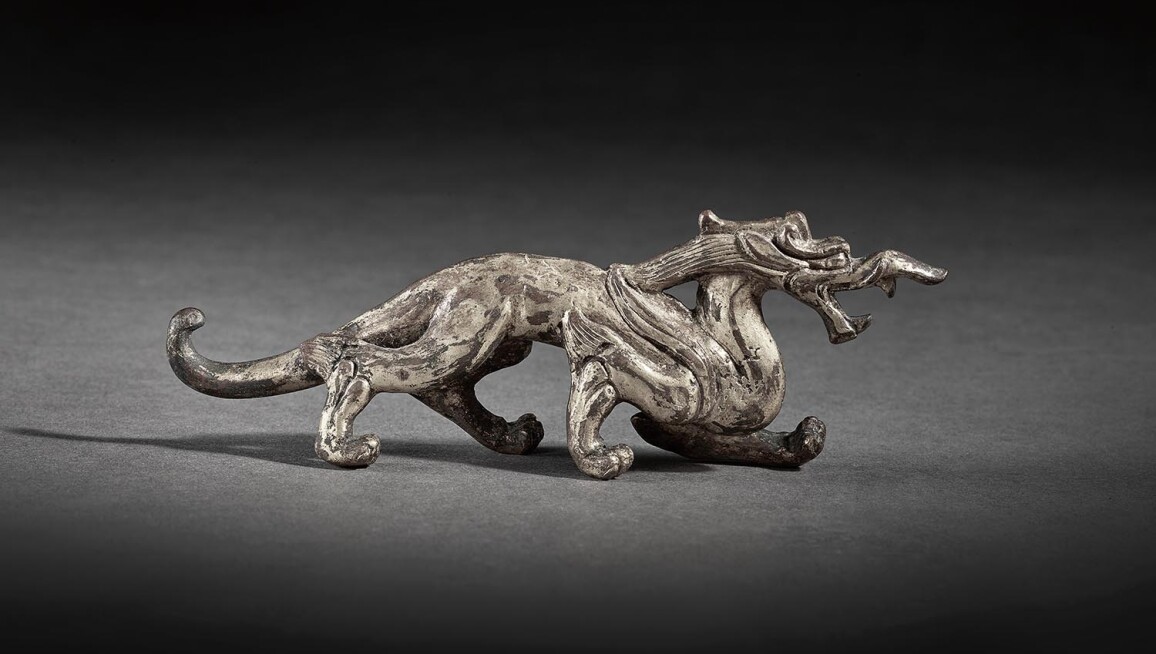 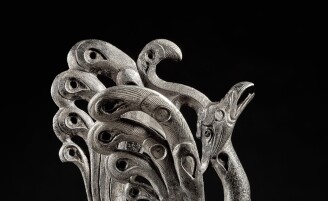